Background: People who inject drugs (PWID) account for the majority of new cases of hepatitis C virus (HCV) infec‑ tion in Europe; however, HCV testing, and treatment for PWID remain suboptimal. With the advent of direct acting antivirals (DAAs) the World Health Organization (WHO) adopted a strategy to eliminate HCV as public health threat by 2030. To achieve this, key policies for PWID must be implemented and HCV continuum of care needs to be monitored. This study presents results of the frst monitoring led by civil society that provide harm reduction services for PWID.

Methods: In 2019, harm reduction civil society organizations representing focal points of Correlation-European Harm Reduction Network in 36 European countries were invited to complete a 27-item online survey on four strategic felds: use/impact of guidelines on HCV testing and treatment for PWID, availability/functioning of continuum of care, changes compared to the previous year and, the role of harm reduction services and non-governmental organiza‑ tions (NGOs) of PWID. A descriptive analysis of the responses was undertaken.

Conclusion: Further improvements in continuum-of-care interventions for PWID are needed, which could be achieved by including harm reduction and PWID organizations in strategic planning of testing and treatment and in eforts to monitor progress toward WHO 2030 elimination goal. 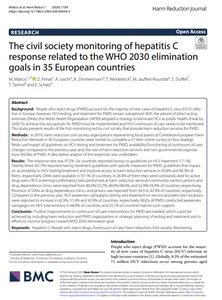