The opioid epidemic in the United States has resulted in the loss of almost half a million lives since 2000. Unfortunately, it seems that the concerning trend is continuing as more than 100,000 Americans died from drug overdoses in a one-year period ending in April 2021. Moreover, there is a growing concern that similar development might occur in Europe. By the end of 2020 in Europe, the European Monitoring Center for Drugs and Drug Addiction (EMCDDA) had identified around 830 new psychoactive substances (NPS), of which 46 were reported in 2020. The 67 new synthetic opioids were detected between 2009 and 2020, including ten reported the first time in 2020. While synthetic opioids are not the largest group of NPS, they are generally associated with the highest risk of an overdose of all NPS.

Most European countries have not been planning on implementing any special or new methods, operation models, or protocols to prepare for possible increases in the use of synthetic opioids. There are shortcomings in the monitoring, data collection, and early warning systems (particularly in rapid communication) and room for improvement in strengthening strategies to prepare for a potential SO crisis.

NPS represent a challenge to current drug policy models. It is assumed that repressive drug policies may increase the emergence of NPS as they are more challenging to identify and control than "traditional" drugs. NPS, including synthetic opioids (SO), synthetic benzodiazepines, stimulants, cannabinoids, and hallucinogens, are associated with severe acute intoxications and deaths in Europe. Despite a range of new measures being introduced, NPS represents a challenge to current drug policy models.

This report draws together the key findings and conclusions of previous reports on European countries' synthetic opioid preparedness.

In Europe, highly potent synthetic opioids (SOs) and related overdoses are a growing public health and safety threat. This report provides guidelines and recommendations on preparedness related to synthetic opioids on the following topics:

The aim of the project SO-PREP is to contribute to the enhancement of SO preparedness of countries in Europe to effectively monitor and respond to increases in SO prevalence and incidents. 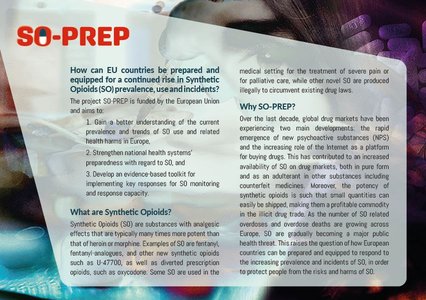 How can EU countries be prepared and equipped for a continued rise in Synthetic Opioids (SO) prevalence, use and incidents?

The project SO-PREP is funded by the European Union and aims to: