Stimulant drugs speed up the messages travelling between the brain and the body. And so, they typically increase the pulse and breathing rate, elevate blood pressure, suppress the appetite and dilate the pupils. Cocaine, methamphetamine, MDMA, khat, nicotine are examples of stimulants.

Speed Limits - Harm Reduction for People Who Use Stimulants

Speed Limits - Harm Reduction for People Who Use Stimulants

Harm reduction as a concept, being defined as “policies, programmes and practices that aim primarily to reduce the adverse health, social and economic consequences of the use of legal and illegal psychoactive drugs without necessarily reducing drugconsumption” (Harm Reduction International, 2018),has gained significantly in importance worldwide since the United Nations General Assembly Special Session (UNGASS) on the World Drug Problem in April 2016. However, the concept of harm reduction is still widely understood as a strategy addressing injection drug use and the harms and risks associated with this route of administration. Harm reduction services for people who use stimulants (PWUS) are less common despite the constant rise in the prevalence of stimulant use at a global scale. These worrisome developments require urgent responses by governments, civil society and international organizations - including in the field of harm reduction. In the light of the recent developments in global patterns of drug use, GPDPD has commissioned Mainline with a comparative study on existing evidence and case studies on harm reduction for stimulants, a still under-researched area of global drug policy for which there is a major international demand.

Currently used approaches to treat stimulant use disorders are still poorly organized and not based on behavioral interventions but on long-term residential treatment, at times involuntary. Most of existing services are relying only on psychosocial strategies, often not effective and not integrated with pharmacological interventions and social support. A group of experts from 25 countries and UNODC staff met to share their views and develop this discussion paper on the treatment of PSUD that outlines the existent comprehensive interventions, including the use of promising medications. The group collected existing scientific evidence and practitioners’ opinions formulating preliminary suggestions for integrating psychosocial and pharmacological therapy, which resulted in this discussion paper.

The purpose of this publication is to provide guidance on implementing HIV, hepatitis C (HCV) and hepatitis B (HBV) programmes for people who use stimulant drugs and who are at risk of contracting these viruses. It aims to:

This briefing note presents definitions for chemsex and brings recommendations to reduce the harms that may be involved in the practice.

This report aimed at collecting information about violations of the rights of GBMSM chemsex workers and studying their barriers in access to HIV services. It is the result of the first survey held in Ukraine and led by GBMSM sex workers engaged in chemsex to study the human rights violations they are facing on a massive scale. recommendations to all involved stakeholders are presented. 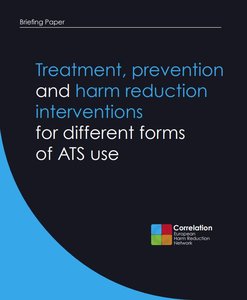 Treatment, prevention and harm reduction interventions for different forms of ATS use

This policy brief aims at contributing to the reduction of the harms of ATS use by describing different trajectories of ATS use and offering a set of evidence-based interventions for different groups of ATS users. The different ATS trajectories are based on qualitative findings of large multinational research, the ATTUNE study, conducted between February and August 2017 in five European countries – the Netherlands, UK, Germany, Poland and the Czech Republic. The evidence-based interventions recommended in this brief are based on a literature review. In this document, both ATS trajectories and interventions from previous studies/programmes are combined to propose tailor-made recommendations for people who use ATS and those providing services to them.