The biology of HIV

HIV stands for ‘human immunodeficiency virus’ that causes AIDS. Immunodeficiency means decrease or weakness in the body’s ability to fight off infections and illnesses.

HIV stands for ‘human immunodeficiency virus’. HIV is the virus that causes AIDS. Immunodeficiency means decrease or weakness in the body’s ability to fight off infections and illnesses. HIV infection leads to a weakened immune system which makes a person with HIV vulnerable to a group of illness, e.g., opportunistic infections, that would not as easily affect a person who does not have HIV infection. AIDS stands for ‘acquired immune deficiency syndrome’ is the final stage of the disease caused by HIV. AIDS results when HIV infection progresses to an advanced stage, damaging the immune system to a point at which the body can no longer fight illness. AIDS is called a syndrome because it is characterized by a group of illnesses. 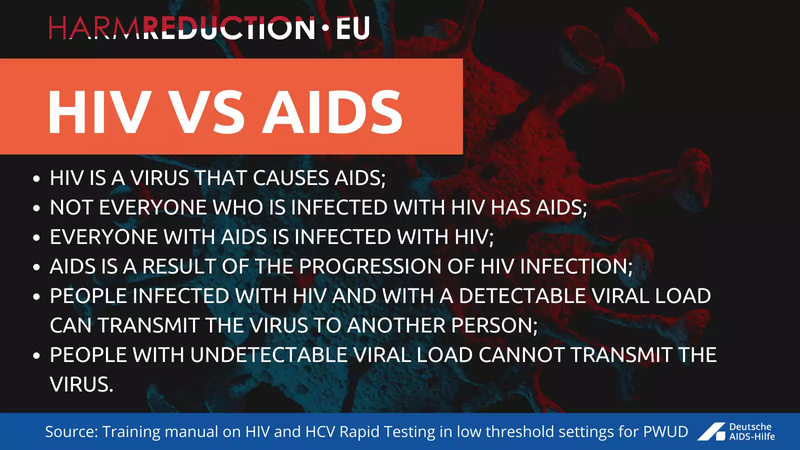 There are two types of HIV viruses, HIV-1, and HIV-2. Both produce the same patterns of illness. HIV-2 causes a slower progress to AIDS than HIV-1. It is important for tests to detect both HIV subtypes, otherwise testing may lead to false negative results.

HIV infects a key group of cells called CD4 T-lymphocytes (later CD4) that coordinate the body’s immune defense system. CD4 T cells produce several proteins called cytokines which play in important part in immune response against pathogens. When HIV-infection destroys CD4 cells, it weakens the body’s ability to fight against pathogens. A healthy person has 800-1200 CD4 cells per one microliter of blood. When the amount of CD4 cells drops below 200 or/and specific diseases occur, a person living with HIV is diagnosed with AIDS. Figure 1 shows the virology and immunologic course of HIV disease.

Over time, more and more CD4 cells perish and ultimately, HIV causes AIDS by depleting too many CD4 T cells. This weakens the immune system and allows opportunistic infections to manifest. CD4 cells are essential to the immune response and, without them, the body cannot fight opportunistic infections. AIDS typically occurs about 10-12 years after the initial infection. With effective treatment with antiretroviral drugs (ARV) the viral load stays under 30 copies of the virus per milliliter of plasma and HIV viruses do not destroy CD4 cells anymore. As a result, the immune system function is restored and opportunistic infections are prevented. People living with HIV who start treatment early can reach the average of the life expectancy in connection with the dynamics described and shown in Figure1. 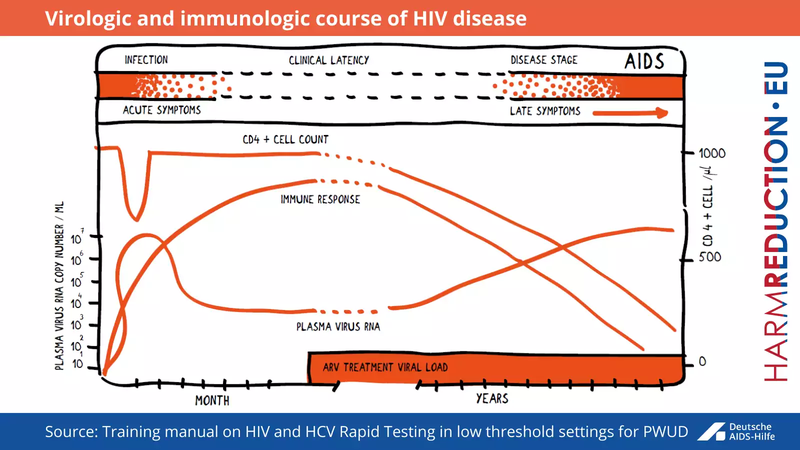 Published: 2022
Return to Course Index
In partnership with: